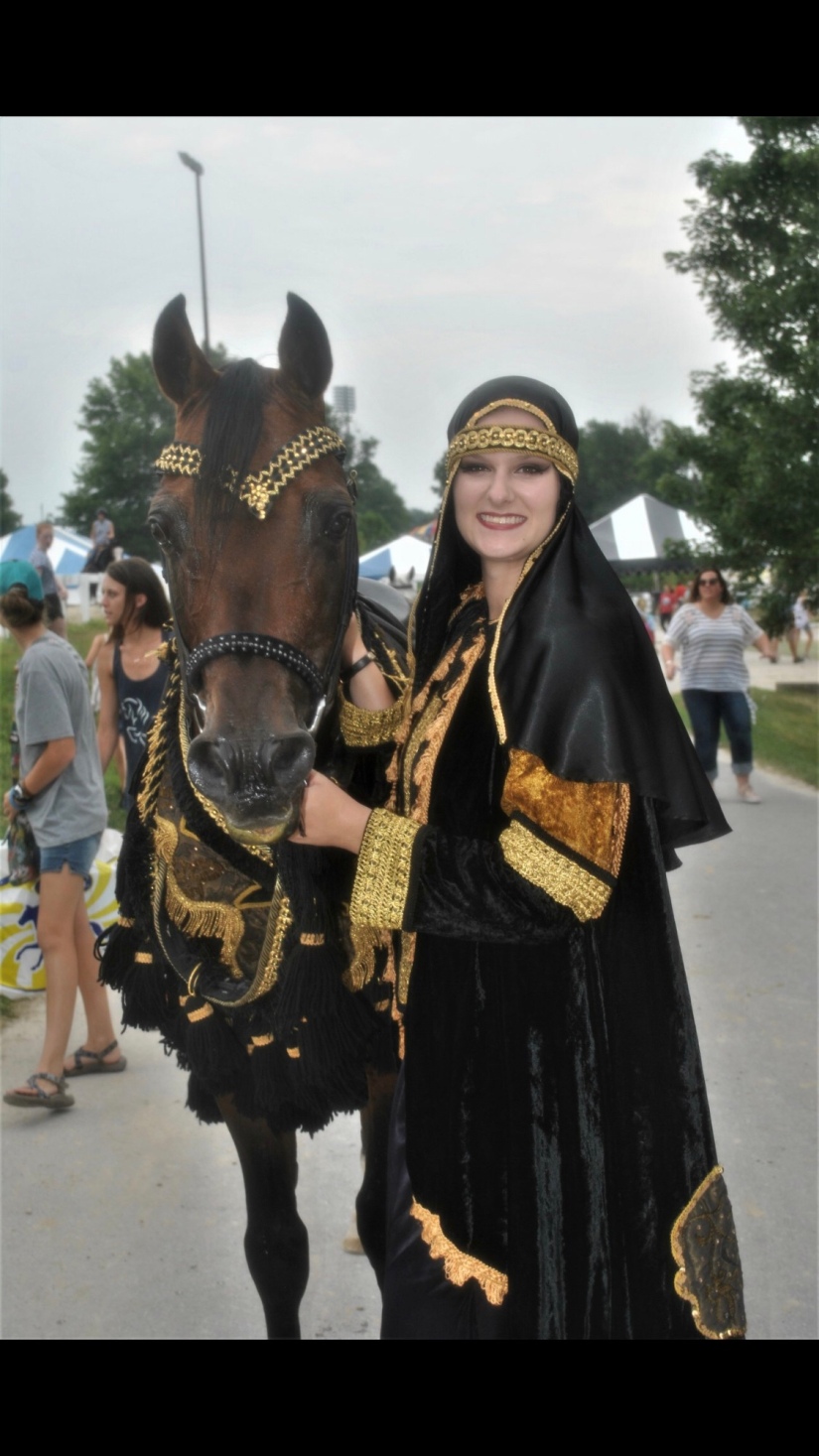 I love the Arabian horse’s sense of loyalty & affection. The Arabian horse either lived in tents or hung around outside with no place to tie. They were nomads they moved & the horses lived among the people. I am 100% sure my Arabs would all cram themselves in my tent … it warms my heart to be called to by a whinny. My favorite geriatric horse is Matem- he literally trumpets with excitement & enthusiasm. There is an energy. When they love you YOU know it. There is a look in their eye … am expression that needs no words spoken.

Arabians are a very popular breed of horse for many equestrians. Many people ride Arabians for show, pleasure and competition. The physical characteristics of the Arabian breed include a dish face, large, wide-set eyes, broad forehead, small, curved ears and large nostrils.

Here are some interesting facts about Arabian horses that you may not know.

•The Arabian breed is over 5,000 years old and is known as the oldest breed and the first domesticated breed of horse.

•Arabians were originally bred in the Middle East. The Arabian horse is the oldest purebred horse in the world. The Arabian was the horse the Bedouin people (nomadic people) of Arabia as early as 3000 to 2500 BC. They were later introduced into Europe and throughout the world.

•Arabians were bred by the Bedouins, a desert tribe in the Arabian Peninsula. This tribe used them as war horses because they could travel far distances in harsh desert conditions due to their large lung capacity and incredible endurance.

•All Arabian horses have black skin underneath their coats, except underneath any white hair. When these horses lived in the desert, the black skin would help to protect them from the hot sun.

•The most common coat color of Arabians is bay. You will also see many chestnuts, grey, blacks and roans.

•The skeleton of a pure Arabian is different from that of other horse breeds. An Arabian has 17 pairs of ribs, instead of 18 and 5 vertebrae instead of 6.

•The horse in the movie “The Black Stallion” was an Arabian stallion named Cass Ole.

The exact translation is quickness.

•The Arabian horse is considered to be the foundation of all modern horse breeds.

•Characterized by a small dish faced head, large eyes and a thin muzzle, the Arabian is considered the most beautiful and elegant horses.

•Arabians are intelligent, sensitive and courageous creatures. They are loyal if treated well and they enjoy attention.

•Some think the Arabian is high spirited and wild. NOT TRUE In fact, the Arabian is an ideal family horse and versatile for any style of riding desired.

•There was an effort to breed Arabians in the United States in the mid-1800s. A. Keene Richard was known to specifically breed Arabians, but all of his horses were lost during the Civil War. He was also suspected of crossbreeding Arabians and Thoroughbreds. There are no known purebred descendants.

With their high tail carriage and the height of how they carry their head, Arabians continue to be one of the most distinctive horse breeds in the world today. These Arabian horse facts show that even if a breed is ancient, it still has the power to influence the modern world in many ways.

•Horses’ eyes are set on either side of their head. This makes it possible for them to see in every direction at once, except directly in front of their nose and directly behind their tail.

•Horses are very sensitive to touch. They can sense a fly landing on any part of their body and use their tail to flick it off.

•Arabian horses were rare in the Americas until 1991 when the Soviet Union collapsed. Those that were in the Americas were often half- or quarter-breed horses. The few pureblood Arabians that did get imported were highly prized and sought after. It wouldn’t be until the 1990s when breeding programs in the West would be started.

This added interest and breeding caused the formation of the World Arabian Horse Association to be formed around the time the European Union was formed. Today Arabian horses can be traded all over the world.

•In 1522, the Ottoman Empire sent more than 300,000 horse-mounted troops into northern Europe. The goal was to conquer Hungary and the surrounding region. The Hungarians, joined by the Polish armies, were able to defeat the Ottoman advance in 1529 near Vienna and captured a majority of the horses brought in the process. Many of these horses would become foundational bloodstock for Europe’s major studs.

•There are several stories that involve Arabian horses that have been offered throughout history. It is said that King Solomon was gave an Arabian stallion as a gift and every hunt that included this horse was successful. Another says that the Prophet Muhammad had five mares return to him after he set his herd loose to drink at an oasis and these mares became the five strains of Arabian horse.

Another says that an angel told the wind to stop swirling, so it gathered itself and the dust into a horse that would become the first Arabian.

•Arabian horse racing events that are breed-specific have existed in the United States since 1959. The average race for Arabians is 6 furlongs and the biggest event of the year is the Arabian Cup Championship. Arabian racehorses are one of the most affordable racing investments that exists in this part of the horse industry, with the average price for a racing horse falling between $5,000-$20,000 in most circumstances.

•In the US, more than 500 sanction Arabian Horse Association events are held annually. These events are sanctioned by the US Equestrian Federation and several different competitions are available for the breed. This includes equitation, sidesaddle, and dressage. Each horse that competes accumulates points toward various achievement awards.

•Many of the world’s most famous (and infamous!) men in history chose Arabians as their mount. George Washington brought the first Arabian horse to U.S. soil and bred them with other horses to create a stronger Calvary mount. Genghis Khan, Napoleon, and Alexander The Great all rode Arabians.

“Drinkers of the wind”

This nickname was due to their overall speed, strength, and endurance. During the later days of the Egyptian empire, these horses were often used to pull chariots. Sometimes they may have even been used for racing in addition to the benefits of having an Arabian around for transportation needs.

View all posts by windymeadows1309